The Largest Number Ever Created

Sure, if you are able to define such a number, then add one, or even 0.5, and you get an even bigger number. But this is not the point. The issue is to come up with such massive numbers in the first place. The biggest ones known to men are produced by unusual recursions, and such recursions can be used to test how powerful a computer is, when dealing with recursive algorithms.

This is known as the Ackermann function. The fact that the recursion always ends no matter what n and m are, is by itself surprising.  Below is an extract of the steps needed to compute A(4,3). 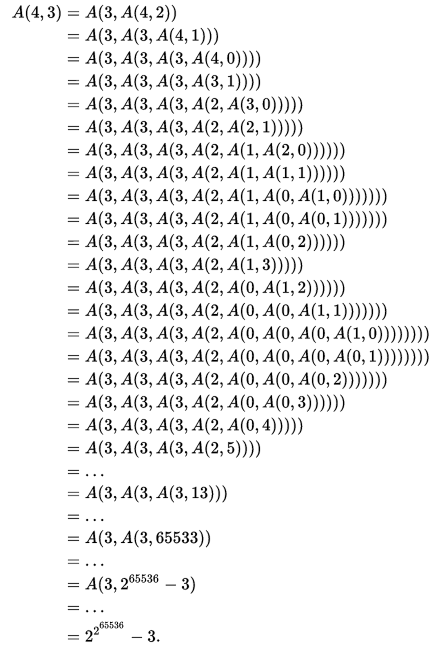 Below is a table that shows the first few values of A(m, n) :

Despite the fantastic growth of this function, it is possible to define another one that dwarfs it.. The Ackermann numbers are incredibly modest compared to Graham's number. Even though there is no hope of ever being able to compute a tiny tiny fraction of its digits, the last 500 digits are known::

Whether these digits are random or not is another question. Click here for more information.

Most numbers can not even be defined. The ones such as 3/4, Pi, the solution of log x = x -1,. or Euler's constant, that can be represented by a formula, represent a tiny proportion of all numbers - such a tiny proportion that its Lebesgue measure is zero.  In short, the vast majority of numbers can not be computed, and not even defined. The big number mentioned here is computable, though no computer will every be powerful enough to compute its digits (these digits are far far more numerous, by many orders of magnitude, than all the atoms in the universe.)

To read more articles from the author, click here.